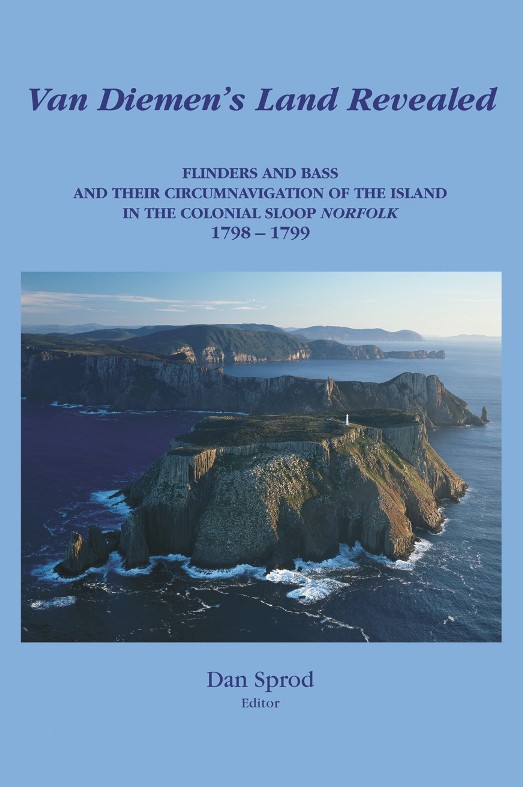 750 copies only. Large 8vo. x, 256pp; frontis portraits, 12pp b&w illustrations, 3 charts folded in pocket at end. Case-bound in blue cloth, with dustwrapper. A fine clean copy. ISBN 0908528353 ***Matthew Flinders and George Bass have been given considerable recognition in publications relating to their lives and achievements. One major exploit - their successful circumnavigation of Van Diemen’s Land in 1798 and 1799 in the sloop Norfolk, which established beyond doubt the existence of Bass Strait and that Van Diemen’s Land was an island - has been overlooked to the extent that no separate work brings together source materials relating to the voyage. Van Diemen's Land Revealed is compiled to correct this deficiency, and presents original accounts written by the two adventurers together with commentary, notes and references, a bibliography and index. The account includes the earlier, and progressive, voyages by Bass from Sydney Cove to Western Port (in Tom Thumb I & II and in a whaleboat) and of Flinders to the wreck of the Sydney Cove. A facsimile of Flinders' most rare pamphlet 'Observations on the Coasts of Van Diemen’s Land, on Bass’s Strait and its Islands, and on part of the Coasts of New South Wales', published in London in 1801 - together with the three important charts which were intended to accompany the pamphlet - is also reproduced.

Title: Van Diemen's Land Revealed : Flinders and Bass and their circumnavigation of the island in the Colonial Sloop Norfolk 1798-1799.