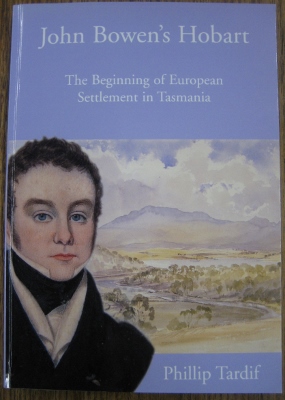 John Bowen's Hobart : the beginning of European settlement in Tasmania.

Large 8vo. xii, 244pp, frontis, 6 colour and 9 b&w illustrations. Soft covers. Errata slip loosely inserted. A fine clean copy, signed by the author. ISBN 0909479224 ***The winner of the Tasmanian Bicentennial Local History Prize - a somewhat ironic choice, given that the Tasmanian government officially declared the bicentenary year to be 2004, and this book is concerned with the first European settlement, at Risdon Cove on the Derwent River in September 1803, under the command of Lt John Bowen. This was a short lived venture; when David Collins' expedition from England arrived early the following year (having abandoned an attempt to establish a colony in Port Phillip Bay), the settlement was moved across the Derwent River to Sullivan's Cove. Bowen had been calling his settlement 'Hobart' and Collins also used this name for the new site; both in honour of Robert Hobart, Secretary of State for the Colonies.

John Bowen's Hobart : the beginning of European settlement in Tasmania.