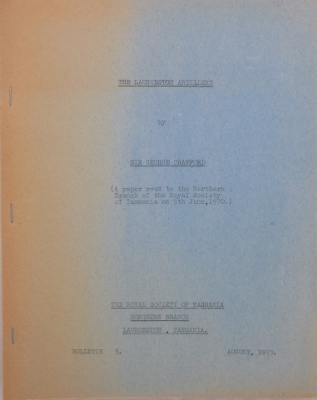 A paper read... on 5th June, 1970. (Royal Society of Tasmania, Northern Branch, Bulletin 3.) 4to. 43pp roneoed typescript (printed rectos only), stapled in wrappers (yellowed towards the spine). A very good clean copy. ***Formed in 1860 as the Launceston Citizens Voluntary Rifle Corps, this unit became known as the Launceston Artillery. It was absorbed into the Commonwealth Military Forces after Federation and went through many permutations - some volunteer, some not - and eventually became the 6th Field Regiment.