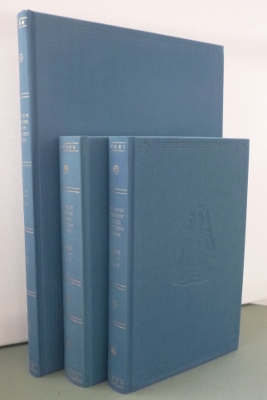 Translated from the French by Christine Cornell. Each part published in an edition of 400 copies of which 99 of the two text volumes and 150 of the Atlases were numbered and bound in half-leather. This is the standard binding in blue linen, blind-stamped ship device on the upper boards, blind rules, spines lettered in gilt. [I] Introduction by Anthony J. Brown. 430pp, frontis & 13 plates (6 in colour), folding chart in text, large folding map in rear pocket (Freycinet's Carte Generale de la Nouvelle Hollande). [II] Foreword by John Ling. Introduction by Anthony J. Brown. xxxviii, 278pp, 2 b&w illus (frontis portrait and one other), 9 reproductions of hand-coloured engravings, 3 maps (including one folding and one folded in pocket at rear). [ATLAS] Folio. xx, [12]pp, 68 maps & plates (27 in colour, includes the double-page 'Carte de la Nouvelle-Hollande'). A fine clean set. ISBN 1876154403 ***The historical account of the Baudin voyage, by Peron and Freycinet (who completed the task after Peron's death), with the accompanying Atlas. This is an entirely new translation of the 1824 second edition, and the first translation into English of the second text volume (the first had been published in English in 1809).

Publisher: Adelaide, Friends of the State Library of South Australia: 2003-08.