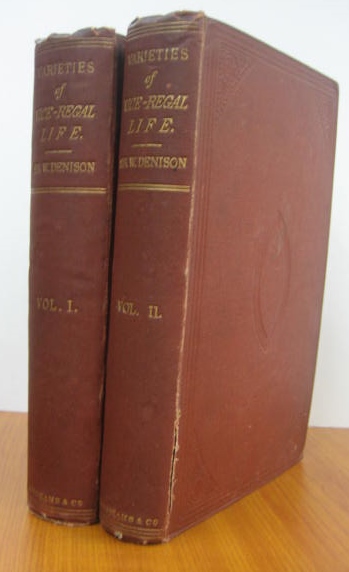 Two volumes. First edition. [I] xvi, 514, [2] (publisher's advert, verso blank) pp, folding coloured map of Tasmania. [II] viii, 446pp, [2] (publ adverts) pp folding map of Southern India (Madras Presidency). Original maroon cloth, decorated in blind; the extremities rubbed. Vol I: some light marks on the upper board and its top corner is bumped; tiny clean tear in fore-edges of the front free endpaper and half-title. Vol II: 40mm split in the cloth near to the foot of the lower front joint. The volumes now with mylar wrappers. One signature towards the middle of each volume is a little loose and has been sitting slightly proud of the fore-edges. The bookplate of S. Denison of Leeds is on each front paste-down, and a small monograph stamp on each half-title. A clean set in good to very good condition. ***Denison was Lt-Governor of Van Diemen's Land 1847–55; Governor of NSW (and Governor-General of the Australian colonies) 1855–61; and Governor of the Madras Presidency 1861–66. An opinionated military engineer, he argued for the continuation of transportation and resisted the establishment of self-government. His account is largely composed of letters, as often as not written by his wife, and contains much valuable information, presented in an unusual and lively manner.