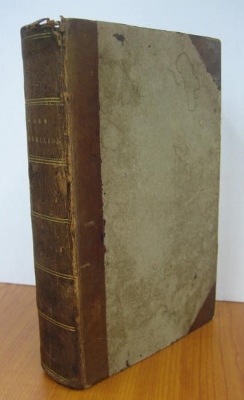 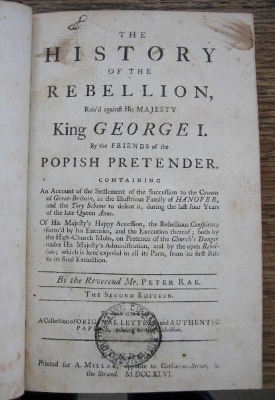 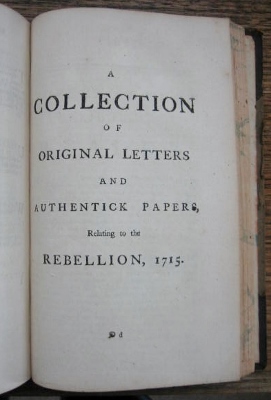 The History of the Rebellion Rais'd against His Majesty King George I, by the Friends of the Popish Pretender...

Containing an Account of the Settlement of the Succession to the Crown of Great Britain, in the illustrious family of Hanover, and the Tory scheme to defeat it, during the last four years of the late Queen Anne; of His Majesty's happy accession, the rebellious conspiracy form'd by his enemies, and the execution thereof; both by the High Church mobs, on pretence of the Church's danger under His Majesty's administration, and by the open rebellion; which is here exposed in all its parts, from its first rise to its final extinction. Second edition. To which is now added a collection of original letters and authentic documents relating to the Rebellion. 8vo. xvi, 488pp (last publisher's advertisement), pp389-99 is an index to the main text, the document section has its own title-page (but the pagination runs on from the main text). Contemporary half brown calf, title and rules gilt stamped on spine, dun papered boards. The extremities rubbed, head of spine with slight loss of leather, the paper with a little light soiling. All edges marbled (and a little faded). Endpapers foxed, a couple of light smudges on the title-page; small round ink-stamp of the Edinburgh Circulating Library on title and at head of page 1. The text pages are clean and crisp. A good clean copy.

Title: The History of the Rebellion Rais'd against His Majesty King George I, by the Friends of the Popish Pretender...

The History of the Rebellion Rais'd against His Majesty King George I, by the Friends of the Popish Pretender...