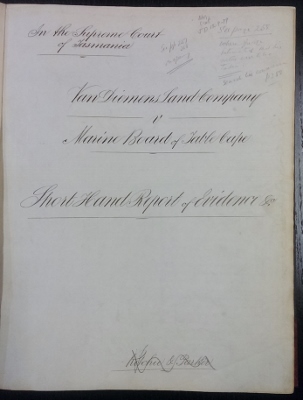 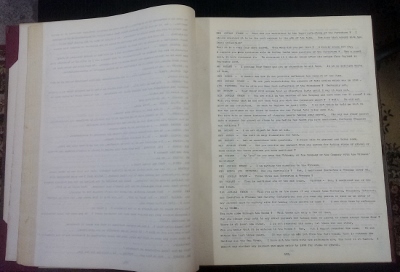 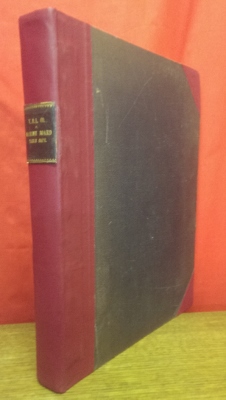 Large folio. Manuscript title and 550pp of typescript (printed rectos only), prepared for the legal firm of Ritchie and Parker (see below). Half-bound in contrasting cloth with leather spine label (the cloth spine and corners appear to be a replacement of an earlier material, probably leather judging by the label). There are some pencilled annotations and much underlining, but the pages are clean and in very good condition, as is the binding. ***The case of the Van Diemen's Land Company v. Marine Board of Table Cape was before the courts for five years (October 1901 to October 1906), involving one appeal in Tasmania and another to the Privy Council in London, which ordered a re-trial in Tasmania, and incurring costs estimated at £12,000. Though at first glance a relatively minor matter concerning the ownership of a small strip of ‘foreshore’ land (that is, between the high and low water marks) at Emu Bay (Burnie), over which the Marine Board of Table Cape had erected a wharf, it was in fact a case to determine the ownership of all of the foreshore land on the Company’s land (some 150 miles), and by extension all of the foreshore land in the state of Tasmania. The Crown, represented by the distinguished South Australian lawyer (and Senator) Sir Josiah Symon and Edward Dobie, the Solicitor-General, argued the case on behalf of the Marine Board. The VDL Company was represented by George Wilson Waterhouse, of the venerable Launceston firm of Ritchie & Parker, and H.W. Bryant of Victoria.

The Company’s claim was for £500 damages for trespass, although it admitted from the outset that the amount of damages was of little consequence; it was the proof of ownership it sought. The arguments involved the status of the incorporation of the Company by Royal Charter in 1825, and the conditions of the grant of its land, formalised in 1848, as well as much matter involving reclamation of foreshores and the use of materials sourced from these areas (and much more besides; even William the Conquerer even gets a mention). After 18 days of the ‘unprecedentedly wearying case’ – as Mr Justice Clarke described it in his summing up to the jury – the verdict went in favour of the Crown. An appeal to the full bench of the Court went the same way, but the Company appealed to the Privy Council in London and there won a re-trial.

At the re-trial a compromise agreement was reached, after considerable argument, on a basis suggested by the Chief Justice Sir John Dodds. In short, the Company relinquished its claim to ownership of the ‘various foreshores’ on the lands granted to it in 1848 and the Crown leased back, for a nominal rental, these areas. The Crown was entitled to resume any portion of these areas for navigation or other public rights, but agreed to prevent any other party from removing material from the foreshore of the Emu Bay block. (See Mercury, 9 October 1906 or North-Western Advocate and Emu Bay Times, 10 October 1906 for a summary of the conclusion of the matter.) The agreement was formalised three years later by an Act of the Tasmanian Parliament (9 Edw VII, no 6).